How It Works: Basic Principles

The treads constantly move, carrying the Bot heads and grippers. When the Bots needs to dwell to pick or place an item, the Bot is moved in the opposite direction of the treads so as to create a net-zero motion. After picking an item, the Bot moves forward to return to the front of the tread.

How It Works: Additional Capabilities

The Treadbot's Bots would be continuously picking and placing, aided by vision systems to find the items' location.

Each tread also has side-to-side motion. Every tread is similar to an XYZ pen plotter. 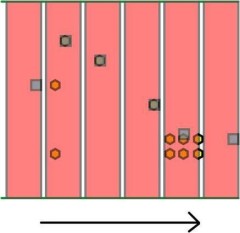 How It Works: At a Glance